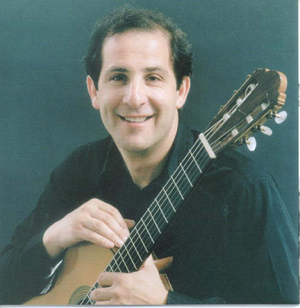 The first guitarist to receive an M.M. from the San Francisco Music Conservatory, Larry Ferrara made his New York debut at Carnegie Recital Hall in 1984. He has performed major recitals with the San Francisco Ballet Orchestra and the Bay Chamber Symphony, among others, as well as recitals in Los Angeles, San Diego, Toronto, Barcelona and Sydney. He studied with George Sakellariou and was personally chosen by Julian Bream for a 1981 master class.

He won prizes at the Carmel Classic Guitar Competition, served on the National Endowment for the Arts Music Advisory Panel and authored a book/CD sequence entitled The Student Repertoire Series (for Guitar), published by GSP, San Francisco. He is also on the faculties of the University of California at Berkeley and City College of San Francisco. The New York Times described his playing as “subtle, intimate and inherently musical,” and called him “an excellent musician.” The San Francisco Chronicle music critic said, “He has an exceptional style, pure and sweet, rhythmically precise yet supple…playing everything with elegant grace and a notably serious feeling for introspection.”

DLE is the exclusive agent for Mr. Ferrara. Mr. Ferrara is available in Napa, Sonoma, the San Francisco Bay Area, the Monterey Bay area and virtually anywhere in the U.S.