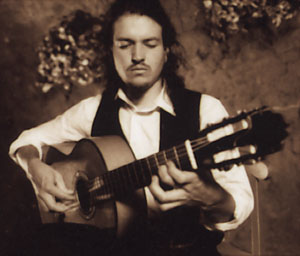 The DLE Bay Area Flamenco Guitarist is one of the premier flamenco guitarists to come from the San Francisco Bay Area, both as an accompanist for flamenco song and dance and as a soloist. He has performed with such world class flamenco artists as La Tania, AndrÈs MarÌn, Cristo CortÈs, and Manuel Gutierrez, as well as with many local artists and companies. While in Italy, he performed with two of the country’s top dancers, Juana Cala, and Maria Jose Soto Leon in venues from Venice to Milan to Sicily.

While his playing style remains grounded in the roots of the traditional Spanish flamenco, he also explores new directions in musical composition as well as blending of elements from the various musical traditions around which he grew up in San Francisco–Indian, Middle Eastern, Latin American, and African.

He has performed in San Francisco’s top event sites as well as venues in China and India. He also directed the music for “Zambra Bailar,” a company mixing flamenco with Middle Eastern music and belly dance. The DLE Bay Area Flamenco Guitarist has studied for years in Spain with several flamenco guitar masters, including Manolo Sanlucar, Paco PeÒa and Jose Luis Rodriguez. He has also studied Indian Classical music under Ustad Ali Akbar Khan and Ghanain drumming with C.K. Ladezkpo. He has a B.A. in Music from U.C. Berkeley.