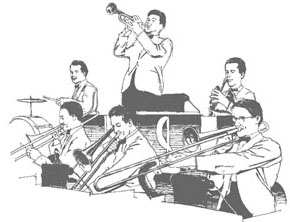 The DLE NR Orchestra (an 18 or 19-piece) is the answer to those who want “a great big band”, featuring THE best Sinatra vocalist in the country, outstanding Nelson Riddle arrangements along with one of the nation’s premier big band drummers. The Band has done events at the prestigious Rainbow Room in New York, overseas events, cruise ships, large fundraisers and many D.C. events.

Besides Billy May’s and Nelson Riddle’s arrangements of Sinatra hits, they play authentic arrangements of songs made famous by The Benny Goodman Band, The Glenn Miller Band, The Harry James Band, The Artie Shaw band and many others. The Band’s phenomenal male vocalist has been written up in major newspapers. He is also an excellent emcee. A female vocalist is available (making the Band a 19-piece). Continuous music is available with this band with a trio or quartet taking over on the Orchestra’s breaks.

The following tracks are all “live” recordings at events. The DLE NR Orchestra is available in Washington, D.C., Bethesda, Maryland, Northern Virginia, New York, New Jersey and anywhere in the U.S.

I've Got You Under My Skin

I've Heard That Song Before

My Kind of Town

You Make Me Feel So Young