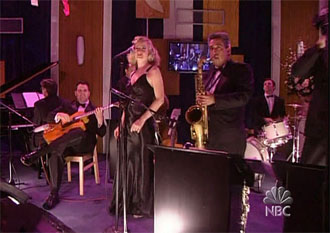 The JS Swing Band (a 7-piece featuring a superb female vocalist) is dedicated to preserving the classic and often overlooked small group swing from the late 1930’s and early 1940’s.

Founded by two dedicated Swing dancers, The JS Swing Band was a vehicle to expose many dancers and listeners to some of the more interesting and little-appreciated tunes from the Swing era, while still being one of the hottest dance bands playing Swing today.

The group has traveled the world. They’ve performed at the London Balboa Festival (UK), Hawaii Lindy Exchange (Honolulu), the San Francisco Balboa Festival, DCLX (Washington, DC), and the All Balboa Festival. They’ve even appeared on a television series.