Welcome to the DLE Mercantile page where you can order David Levin’s 2018 solo piano CD “What Hand Problems?” below. 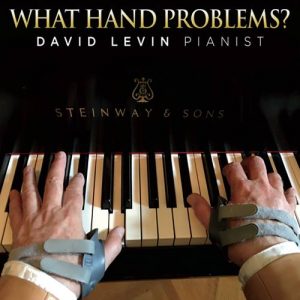 David Levin is a self-taught classic jazz pianist who found himself at 22 in a musical “rut” unable to break out of the “stride” style and into one more commercially suitable for hotel lounges. In 1973 after moving to Southern California, he was told about a great swing pianist from Benny Goodman and Artie Shaw Bands named Johnny Guarnieri who was playing nightly at a restaurant in North Hollywood. After a few months of watching this piano genius five nights a week at that restaurant, Levin became Guarnieri’s fourth protege.

45 years later (having performed for heads of state, Celebrities and at noted New York venues like The Rainbow Room, The Plaza Hotel and Harry Cipriani), Levin finally recorded his first commercial CD just a few days after hand surgery for a trigger thumb that would have ended his performing career. His hand surgeon found that Levin also had CMC joint issues but wasn’t yet a candidate for surgery. She recommended PUSH MetaGrip® thumb braces and these have allowed Levin to continue concertizing and to record this CD including one “brutal session” where he recorded 45 songs in one afternoon.

Levin has become one of the foremost interpreters and performers of classic movie songs. One of the rare themes, Enchanted Cottage (1945) by movie composer Roy Webb, is featured on this CD as are three other movie themes–Laura, Somewhere In Time and The High And The Mighty. The CD is a tribute to Johnny Guarnieri with an extended version of “Stars Fell On Alabama”, a song recorded by Guarnieri’s trio in 1946 and the song that brought Levin out of stride piano and into  New York-style lounge piano.

The mp3 sample below is a portion of “Here’s That Rainy Day” (Van Heusen-Burke) which Levin recorded on January 2, 2018 in Oakland, CA on a refurbished 1909 Steinway B.

Featured songs on this CD: 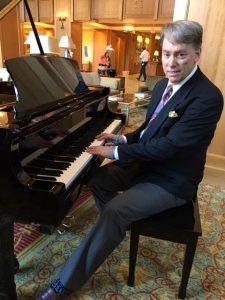 Also of note: If a song has a good verse, Levin plays it and this project was no exception. Seven of the sixteen tracks have verses.

Order your hard copy of David Levin’s solo piano CD What Hand Problems? by clicking on the Buy Now button below!